Looking for a great social distancing activity?! The family can drive around town using the downloadable map below, or you can enjoy the fresh air in downtown Shipshewana. Or scroll down to take our ‘virtual tour’ from the comfort of your home. Our beautiful murals are great to take selfies in front of!!! Don’t forget to tag us when you post #shipshewana

The Walldogs are a group of highly skilled sign painters and mural artists from all over the world. Every year dozens of artists visit a small community and transform the town with murals depicting local history. The Walldog Movement is quickly gaining popularity and is a great way for small towns to attract tourists.

In 2014, the Walldogs spent a week in Shipshewana painting 16 murals throughout town. Each mural has its own meaning regarding the history of the community and the influential people and businesses that made Shipshewana what it is today. 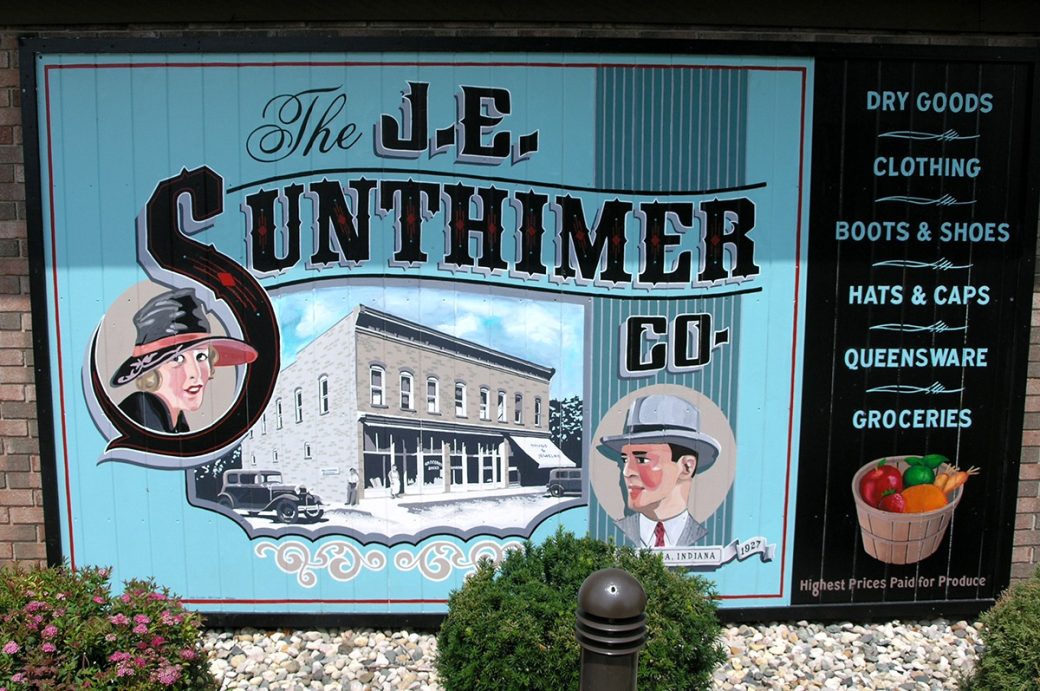 Wolfe Building/Town Hall – 345 Morton St.
The mural on the side of the Wolfe Building pays tribute to Joseph E. Sunthimer. He was the owner of his own general store, selling dry goods, clothing, boots, shoes, hats, groceries, and more.

Forks County Line Grocery Store – 7900 E North Village Dr.
The mural on Fork’s County Line Store depicts Mahlon Y. Miller, who originally worked as a clerk in the general store of J.E. Sunthimer. Eventually (sometime between 1920 & 1925), Mahlon opened his own general store. Although he had help from his wife, Mahlon devoted nearly all of his time to his store. His work ethic exemplifies the hard work of Shipshewana business owners. 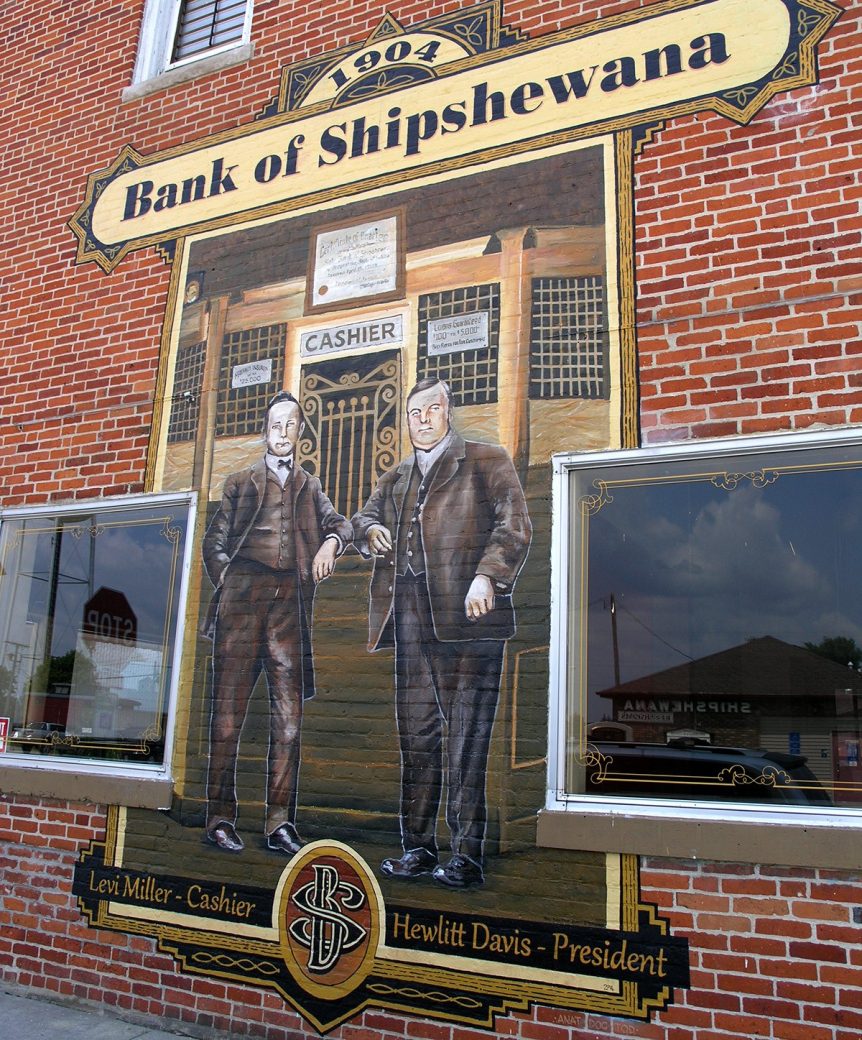 Newbury Township Office – 260 N Morton St.
Hewlitt Davis, son of Shipshewana founder Hezekiah Davis, was President of the original Farmers State Bank of Shipshewana. His partner was Levi Miller who served as the lead cashier at the bank. 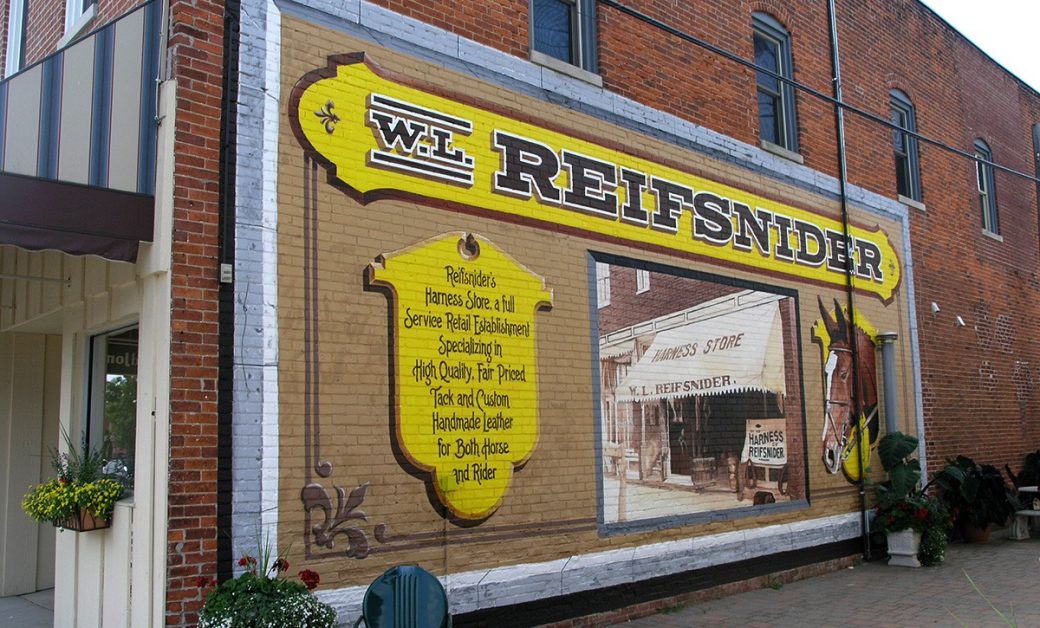 Morton Street Alley
Wesley Reifsnider was the owner of a high-quality harness store in the early days of Shipshewana. He set very fair prices and specialized in making custom, handmade leather for both horse and rider. He was well respected among the people of Shipshewana during his time.

Note: This mural is a favorite place for our visitors to snap a selfie. Looking for more great places around town for pics?? Check out our blog post for more ideas: 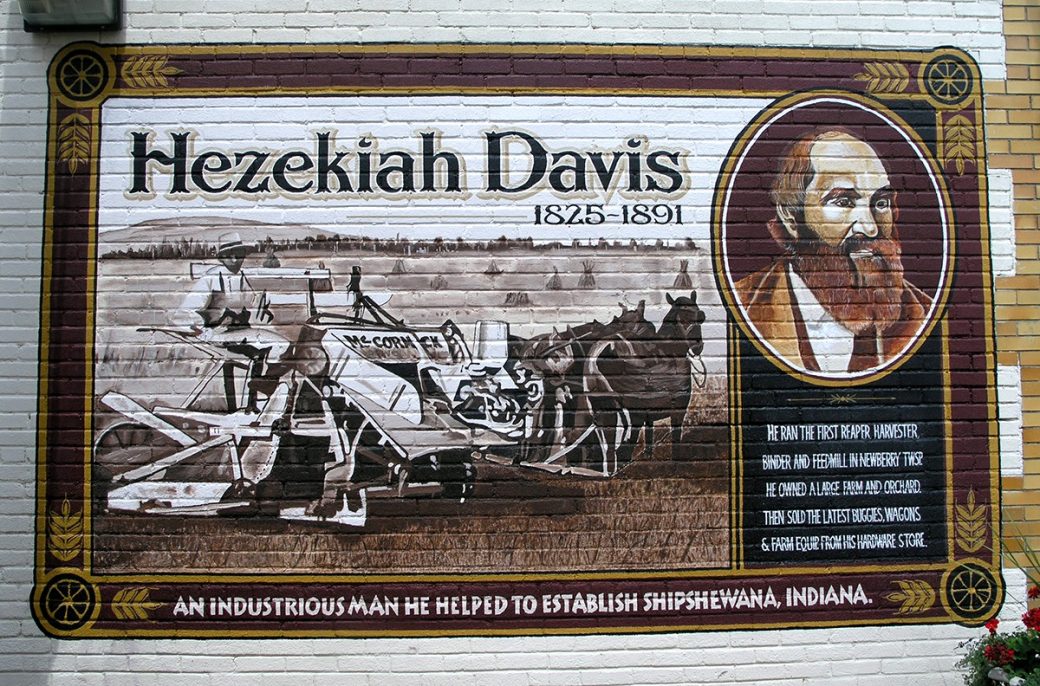 Morton Street Alley
This mural was dedicated to the most important man in the town of Shipshewana’s history. Hezekiah Davis moved to Lagrange when he was just a young boy, and his impact on the community was felt not long after. In 1888, he founded the town of Shipshewana. Without Mr. Davis’ influence, who knows where our town would be. 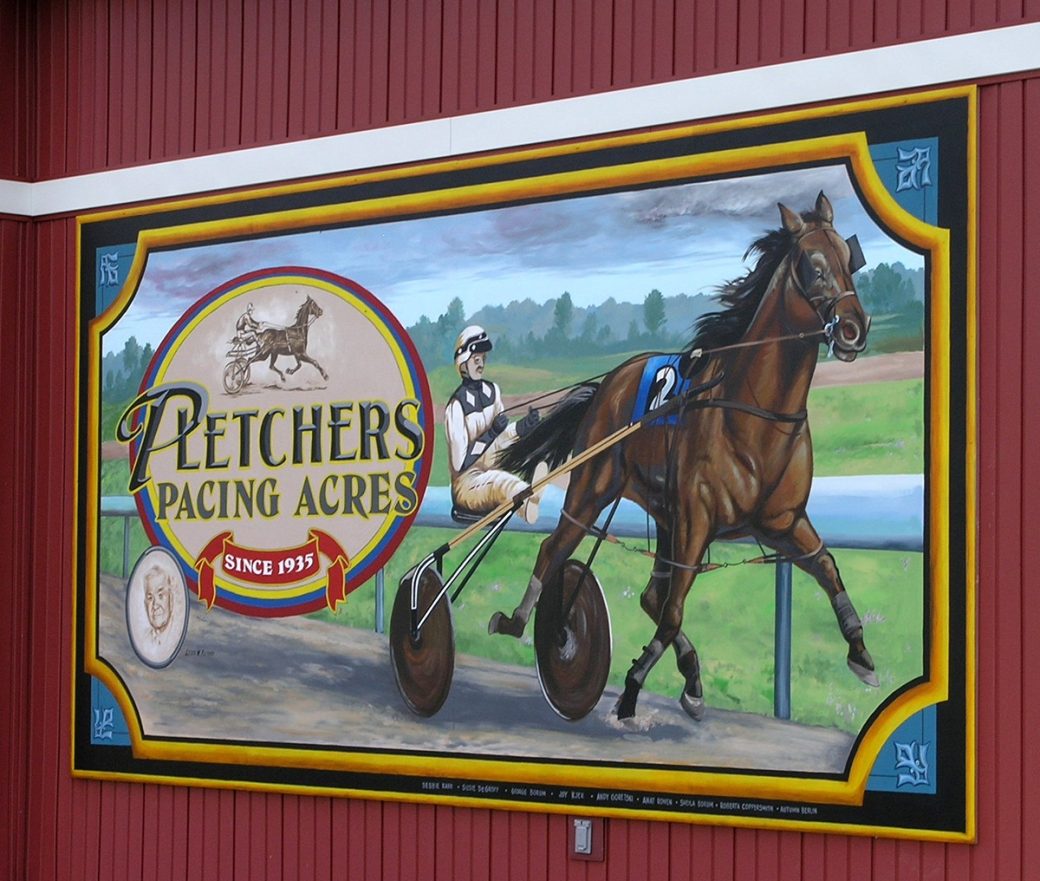 Trading Place Pavilion – 368 S Van Buren St.
This walldog is on the north side of the Farmstead Event Pavilion. Lester William Pletcher, along with his wife Irma, founded Pletcher’s Pacing Acres in 1935. Lester reportedly raced many top horses all throughout the midwest. He was admitted into the Harness Horse Hall of Fame in Indiana & Illinois. (Stop in to the Visitor Center next door while you’re checking this mural out!) 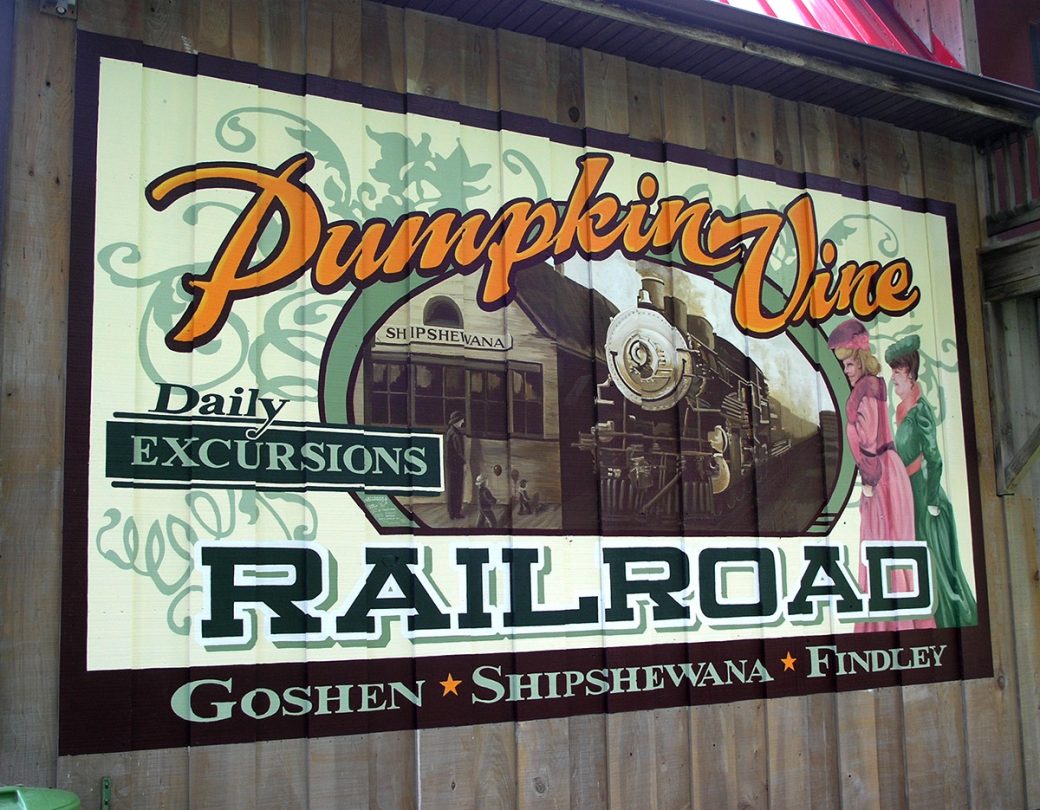 310 N Harrison St.
The Pumpkinvine Railroad was not only built before the town of Shipshewana, but it was also the reason for the town! The tracks were laid in 1888 for a railroad running east and north from Goshen to Middlebury, then up through Northeast Indiana into Sturgis, and finally into Findlay, MI. Soon after, the town of Shipshewana was founded. Now a biking trail has been implemented along the old railroad route from Goshen through Middlebury/Shipshewana.

Shipshe General Store – 420 N Van Buren St.
Miles and Willard Bennett were a father-son duo that shod horses for locals from 1902-2954. While blacksmith shops aren’t as known today, there are many local men that provide this kind of service and carry on the Bennett spirit. 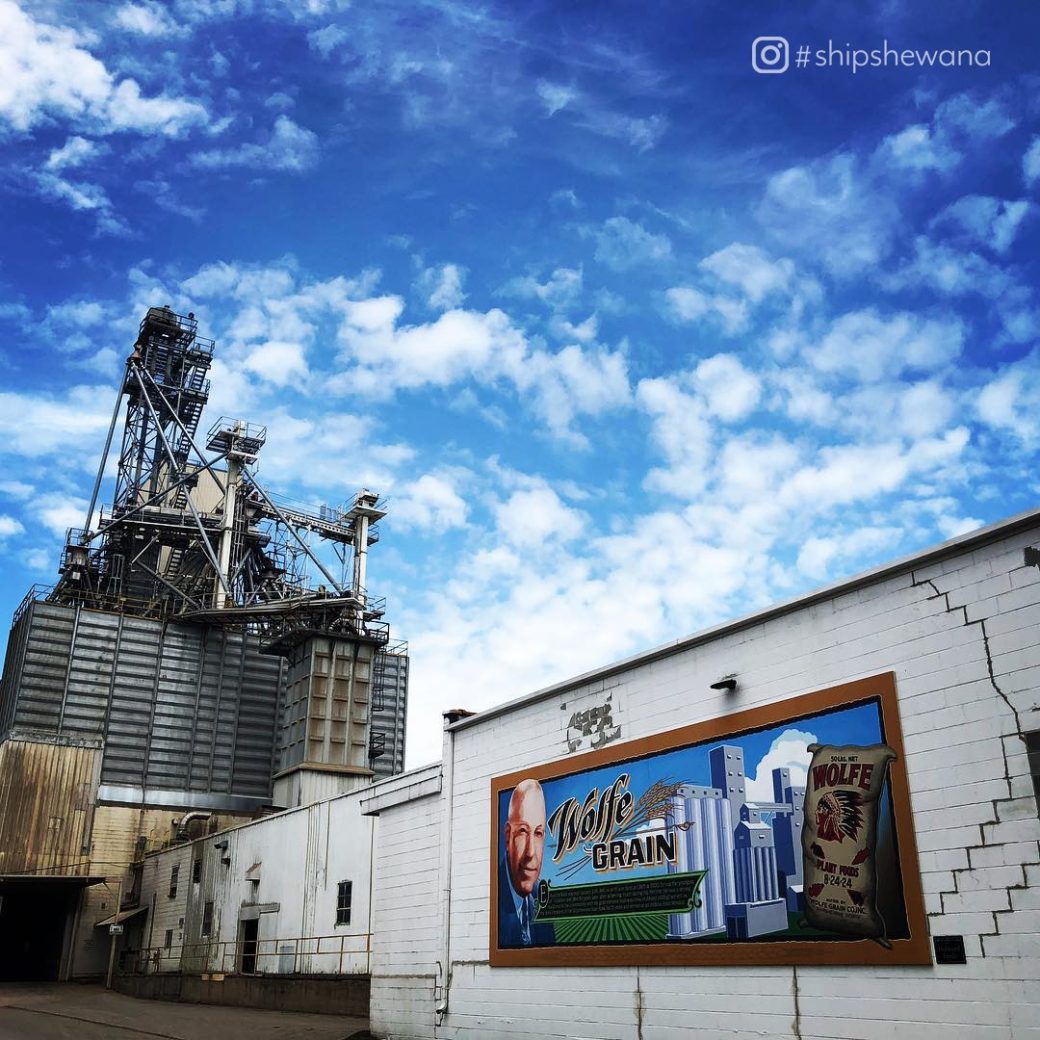 Hubbard Feed Mill – 135 Main St.
This walldog actually has a mini biography painted into it It reads, “Edward A Wolfe was born January 20th, 1890 on an 85 acre farm at CR675 & SR120.  Ed was the youngest of 7 children and died 80 years later, after achieving much during his lifetime.  He was a strong backbone in the community with his grain elevator business (now Hubbard Milling), served as the President of the Shipshewana State Bank for 25 years, and served as an Indiana State Senator.”

Countryroad Fabrics – 1205 S Van Buren St.
This mural odes to the Klondike Saw Mill, founded in 1864. The original mill was steam-powered and looked “something like an old locomotive.” Supposedly, the sawmill was first located south of where Shipshewana now stands, but the Farver brothers (Johnathan and William) moved their business into town when the railroad came and built a switch line back to the mill. Their lumberyard and sawmill were located on the east side of town where the town park is today.

Cherry Pickers – 160 Morton St.
The Shipshewana Indians were a baseball team of local players formed in 1906 by Elkhart businessman H.E. Bucklen. Mr. Bucklen constructed a resort near Shipshewana Lake which included a baseball field and stands. The team played games on Sunday afternoons and drew fans from all over Northern Indiana and Southern Michigan, many of whom would take the train to see the games. It is unknown exactly when the Shipshewana Indians stopped playing, although it’s speculated that World War I and the closing of the St. Joseph Valley Line led to the dissipation of the team. 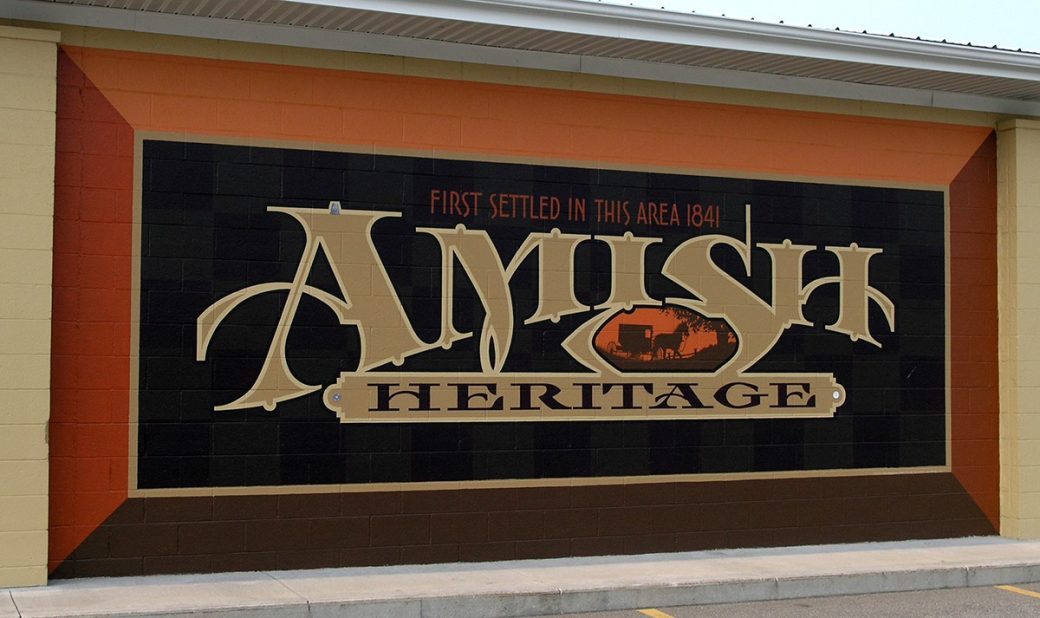 Six Twelve Restaurant – 305 S Van Buren St.
This mural is a simple dedication to the Amish of our area. The Amish first settled in Shipshewana in 1841, most came from Somerset County, Pennsylvania. These were the “Dutch Amish” who has come to PA from Europe in the 1700s to escape persecution, and then moved westward into Ohio and Indiana in the early 1800s. Since coming to the area, the Amish culture of strong values pertaining to family and religion has influenced all. 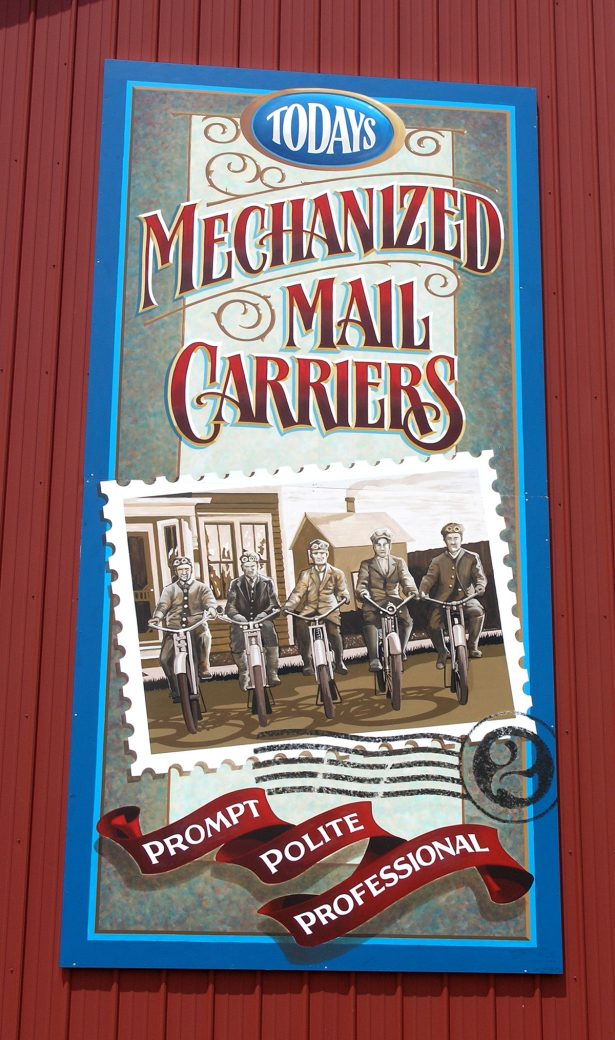 Blue Gate Performing Arts Center – 760 S Van Buren St.
This mural depicts Hudson Automobiles, one of the true treasures of Shipshewana. Although they weren’t created in Shipshewana, a young Amish boy’s love for these beauties is to be credited for the incredible assortment of Hudsons once inside the Blue Gate Performing Arts Center at Hostetler’s Hudson Museum. That young Amish boy (Eldon Hostetler) grew up to become the famous inventor and passed away in January of 2016. 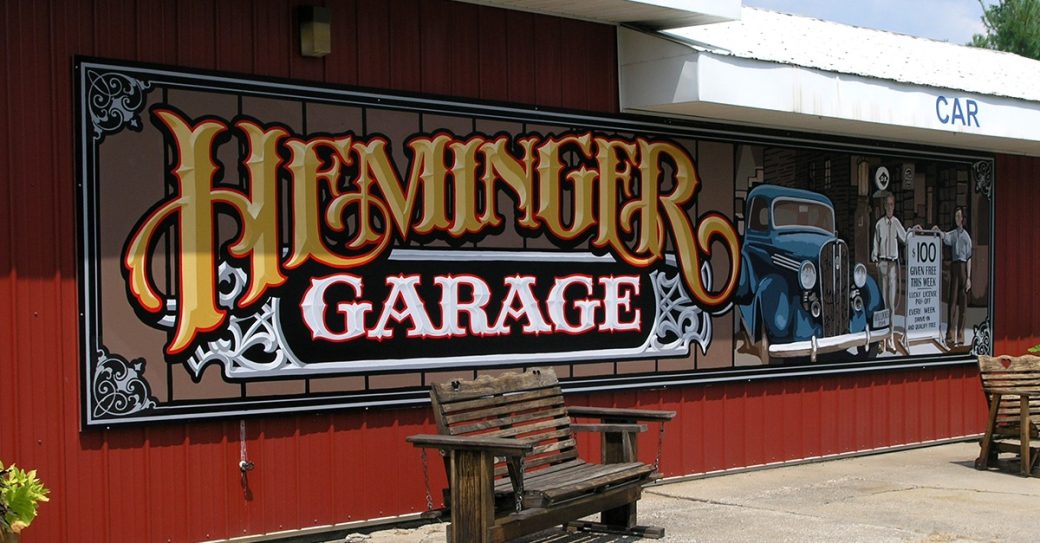 Shipshewana Campground South Park – 1105 S Van Buren St.
Willard Francis Heminger was the owner of a mechanic shop in the area. His love for cars was expressed through the countless hours that he worked at his garage. 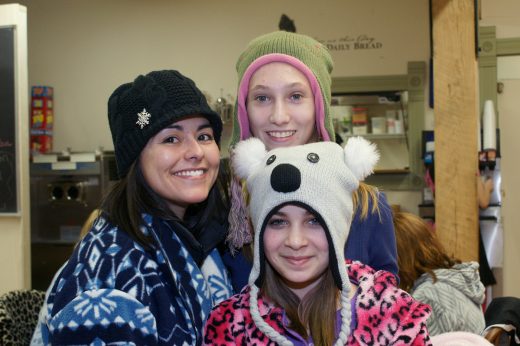