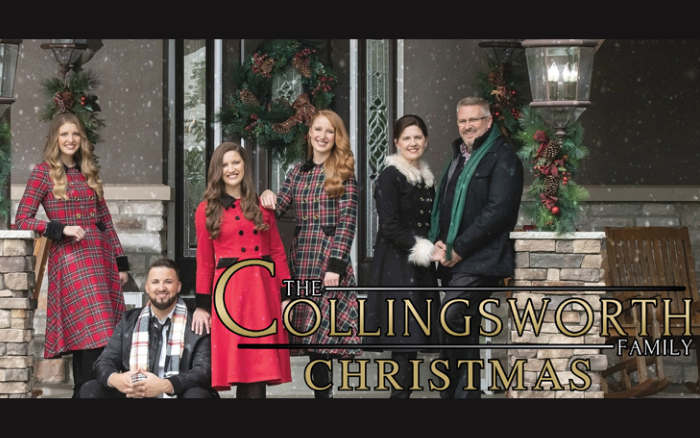 Excitement, spiritual anointing, family-emphasis, and musical excellence are what you can expect to find when you step across the threshold of the auditorium for an Evening of Family Worship and Praise with The Collingsworth Family.

Since their first engagement together as musicians for a church camp in Petersburg, Michigan in August, 1986 until now, the ministry God has given Phil & Kim has expanded and flourished until it is a full-time livelihood that involves their entire family. Their boundaries of influence have expanded until they have sung and played all over the United States (as well as internationally) into their 25th year of ministry. Their constant, persistent attention to cutting-edge arranging, musical excellence, and a proper balance of spiritual emphasis are the keys to success God has helped them tap.

Phil & Kim’s actual base of ministry began during their college days. Phil is a 1986 graduate of God’s Bible School & College, Cincinnati, OH. This is the famous, 100+ year old college that is well-known within Christian education ranks for having been the American college where Oswald Chambers (“My Utmost For His Highest”) taught. Phil also completed professional trumpet studies at College Conservatory of Music, University of Cincinnati and earned a Bachelor of Sacred Music degree with a double major in trumpet performance and music education. Kim attended Union Bible College, Westfield, IN where she was very instrumental in arranging most of the music that was performed by the college’s traveling music groups.

Since that time, many ministry opportunities have come across their pathway. They have always maintained a public performance ministry, which for the first fourteen years included doing music presentations for church camps and extended-length revival campaigns. They have also held the positions of Ministers of Music, Hobe Sound Bible Church, Hobe Sound, FL; Director, Music Division, Union Bible College, Westfield, IN; and Phil was Dean of Enrollment Management at his Alma Mater, God’s Bible School & College, Cincinnati, OH.

In January, 2000, Phil & Kim transitioned to a new, all-concert ministry. They began recording professionally and currently exclusively utilize one of Nashville’s most award winning producers, Wayne Haun. This new emphasis began to expand their boundaries rapidly. Their home has seen the addition of four children across the years and the children are now very actively involved in the ministry. Their two oldest daughters are quite proficient on the violin and play at each of their concerts. Their entire family sings together in an ensemble as well as Brooklyn, their 22 yr old daughter, joining them in trio vocals for most of the program. Kim is well-known for her phenomenal mastery of the piano and the extraordinary talent God has given her is a part of each concert, as well as trumpet solos from Phil.

They previously released a “first” in the Christian Music Industry, filming two full length music videos at the famed Music Hall in Cincinnati, OH, the home of the world-class Cincinnati Symphony Orchestra. The two filmings were the first Christian concerts ever to be filmed at a major symphony venue. They have also released two videos filmed in High Definition by Gaither Television Productions with the Flint Symphony Orchestra, Flint, MI.

On January 1, 2004, they signed an exclusive booking agreement with The Dominion Agency of Fayetteville, NC, which now represents them in all personal appearances. On March 1, 2011, they move into a new multi year, exclusive recording agreement with StowTown Records, Nashville, TN, one of Gospel Music’s newest and most exciting record companies, owned by Ernie Haase and Wayne Haun. Collingsworth Family recorded products are marketed nationally to the CBA Market thru Provident Distribution and to secular markets by Sony Music.

Their ministry has been featureded on the nation’s largest gospel music syndicated radio program, The Gospel Greats with Paul Heil as well as on Daniel Britt & Friends on XM/SIRIUS Satellite Radio’s Enlighten. Their music is regularly featured on Enlighten, GMT (Gospel Music Television), The DayStar Television Network, and has also been featured in one hour prime-time specials on the INSP Television Network. The Collingsworth Family, at the personal invitation of Bill & Gloria Gaither, appeared on the newest Homecoming Series taping filmed at the Grand Ole Opry in Nashville, TN. They have also been added as regulars on many of the Gaither Homecoming Concerts, making appearances with Gaithers in some of their largest venues in the US and Canada. Their personal appearance schedule shows the broad appeal their family emphasis has, performing in all types of venues across the US, the Cayman Islands, and recently in Sweden.

The rapid expansion they have seen occur with the transition to an all-concert ministry is a direct result of the emphasis they have placed on the power of prayer. Each Tuesday evening, they hold a private prayer meeting in their home for the specific purpose of praying for the salvation of their children and the expansion of their ministry. Since the beginning of these weekly prayer meetings in 2000, the doors of opportunity for ministry have opened to them, crossing all evangelical denominational boundaries. Phil & Kim’s entire purpose is to give the talent God has loaned them back to their Creator as a sacrifice of praise.