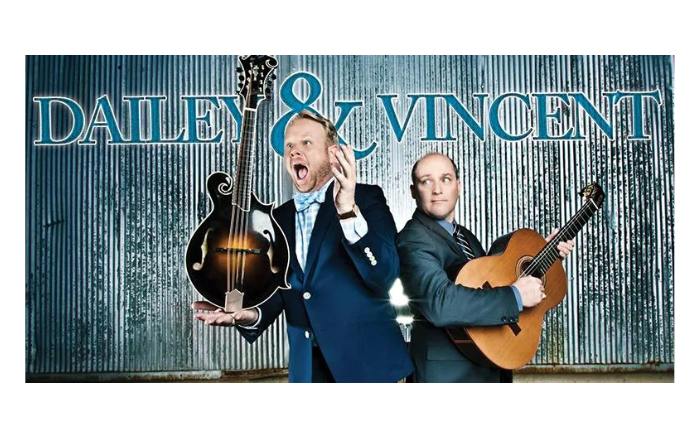 Jamie Dailey and Darrin Vincent became the most heralded new act in bluegrass as their debut album Dailey & Vincent (2008) and busy tour schedule introduced them to wildly appreciative audiences. The group took home seven awards at the 2008 International Bluegrass Music Awards Show, including Entertainer of the Year and Album of the Year. Brothers from Different Mothers presents the band at a level of synergy that only comes from constant live performing. It exudes the enthusiasm of a venture still fresh for all its participants. Jamie Dailey and Darrin Vincent have been bluegrass musicians throughout their careers and never depart from that core sensibility on Brothers from Different Mothers. But, like the earliest icons, they also push the bluegrass envelope. Best of all, they’ve found the closest thing to brotherhood – a true musical partnership.

Jamie Dailey (guitar, bass, lead and harmony vocals) was hired by Doyle Lawson & Quicksilver in 1998 as lead, baritone and tenor singer and bass player. Three years later he switched to guitar, but he continued to sing lead and harmony vocals on the concert trail and on nine of the band’s albums. During Jamie’s tenure the band won 13 IBMA Awards – including Vocal Group of the Year from 2001-2007 and Song of the Year for Blue Train, which featured his singing – and earned four Grammy® and five Dove Award nominations. Jamie has recorded with Dolly Parton and Rhonda Vincent, appeared on five Gaither Homecoming DVD’s, and was a guest on Ricky Skaggs’ Grammy-winning Brand New Strings album.

Darrin Vincent (mandolin, bass, guitar, lead and harmony vocals) started singing at age three and playing music at age six as part of his family band, The Sally Mountain Show, along with sister Rhonda Vincent. As a member of Ricky Skaggs and Kentucky Thunder for the past ten years, Darrin has won five Grammy Awards (Ancient Tones, Soldier of the Cross, A Simple Life, Brand New Strings, Instrumentals) and eight IBMA Awards for Instrumental Group of the Year. He also performed on Grammy-winning albums by Dolly Parton (The Grass is Blue) and Jimmy Sturr (Top of the World). He has performed and recorded with a multitude of other artists including Nora Jones, Emmylou Harris, Earl Scruggs, Bruce Hornsby, Vince Gill, John Hartford and Keith Urban. Darrin earned three Grammy nominations for co-producing Rhonda Vincent’s One Step Ahead, Ragin’ Live and All American Bluegrass Girl. His other production credits include Susie Luchsinger’s Dove Award-nominated Count It All Joy, The Cherryholmes’ Bluegrass Vagabonds, and Hunter Berry’s IBMA-nominated Wow Baby.