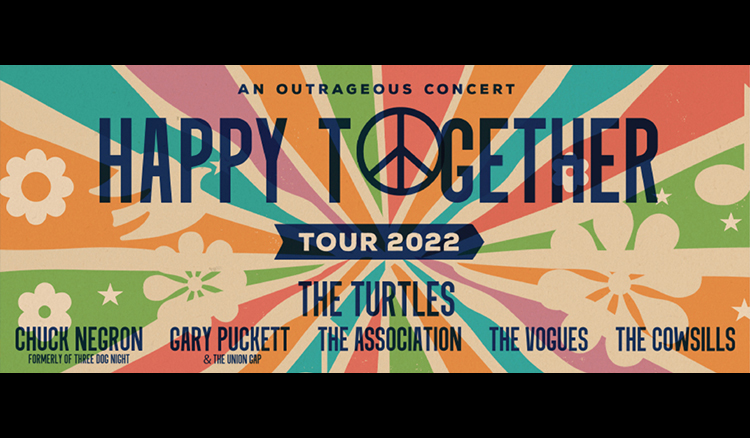 THE TURTLES are best known for their harmony-heavy California pop sound. With such hits as “Elenore,” “She’d Rather Be With Me,” “It Ain’t Me Babe,” “You Showed Me” and the title of the tour, “Happy Together,” the band ruled the airwaves in the late ’60s. Ron Dante joins the line-up to delight with his own mega-hits, “Sugar Sugar” and “Tracy.”

CHUCK NEGRON, formerly of Three Dog Night, returns to the tour for 2022 bringing with him his outstanding lead vocals on such global hits as “Joy To The World,” “One,” “Mama Told Me Not To Come,” “Black & White,” “Shambala,” “An Old Fashioned Love Song,” Easy To Be Hard,” “Eli’s Coming” and more. Three Dog Night scored an impressive twenty-one Top 40 singles and twelve consecutive gold albums in the late ’60s and throughout the 70s.

We are thrilled to have GARY PUCKETT & THE UNION GAP back on THE “HAPPY TOGETHER” TOUR. Gary’s trademark voice will be belting out his hits one more time. Fans will affectionately remember “Young Girl,” “Over You,” “Woman, Woman,” “This Girl Is A Woman Now,” “Lady Willpower,” “Don’t Give In To Him” and more.

Also returning to the tour for 2022 they are THE ASSOCIATION, who enjoyed massive radio success in the ’60s with such #1 hits as “Cherish,” “Windy,” “Never My Love” and “Along Comes Mary”. This iconic vocal group was a staple on the radio airways in the 1960s.

THE VOGUES, are also known for their harmony-driven soaring pop sound. THE VOGUES had numerous Top 10 hits with singles such as “Five O’Clock World”, “You’re The One,” “My Special Angel” and “Turn Around Look At Me,” among others.

Rounding out the bill are THE COWSILLS, the harmonious family act (two brothers and a sister) that inspired the smash ’60s hit television show, THE PATRIDGE FAMILY. They are sure to delight with their best-known songs, “Hair,” “Indian Lake,” “The Rain The Park & Other Things (I Love The Flower Girl)” and more.