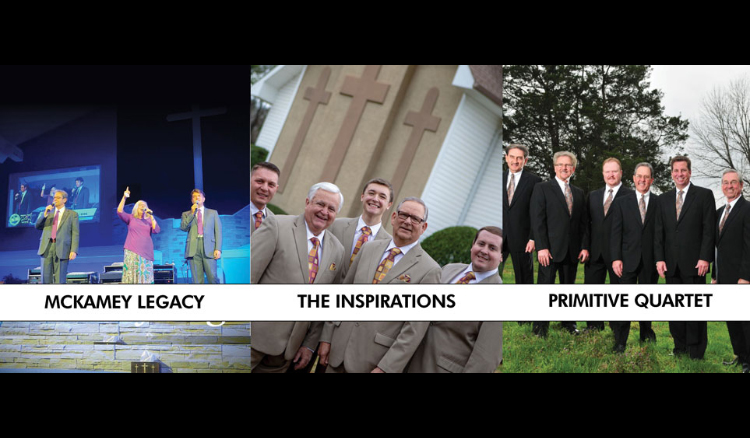 Inspirations
Archie was born on January 6, 1949. Raised in a family with a deep love of gospel music, he and his family members would get together regularly to play musical instruments and sing. This led to friends and family organizing The Inspirations in 1964, when he was only 15 years old. A highly-accomplished athlete at Swain County High School, Archie gave up playing school sports in order to sing full-time. Shortly after, the songs ‘Jesus Is Coming Soon’ and ‘Touring That City’ led The Inspirations to becoming a household name in professional gospel music. They also made regular appearances on the ‘Gospel Singing Jubilee’, broadcast in every major television market in the United States and viewed by millions weekly.

During his tenure with The Inspirations, he helped them place more songs on Singing News Radio Airplay Charts than any singing group and Archie has had the feature vocal on more charting songs than any singer ever, including several Songs of The Year and even others that peaked atop the radio charts. He also was chosen as Favorite Male Singer three times and Favorite Tenor on four occasions by subscribers of Singing News in its annual Fan Awards balloting. In 1999, Archie was the recipient of the coveted Singing News Marvin Norcross Award, the most prestigious award in all of Gospel Music. For many years, Archie served as a member of the Southern Gospel Music Association’s Board of Directors. In October of 2007, Archie Watkins was inducted into the Southern Gospel Music Hall of Fame in Pigeon Forge, TN.

The group, McKamey Legacy is a family trio from Clinton, Tennessee that came to be after 39 years of full-time touring with the rest of their family, The McKameys.

After that group retired in 2019, and after much prayer, group members Connie Fortner (Ruben and Peg’s daughter), her husband, Roger Fortner and their son, Elijah Fortner felt the call from God to continue the legacy of their family and they began traveling and singing again in 2021 as McKamey Legacy.

The group will be touring on a part-time basis, performing songs that were loved and most requested from their McKamey days as well as some new songs that fit their message.

Sharing the Gospel in song to a lost world and sharing the message of hope to discouraged Christians is their goal, following God in everything that they do and bringing Glory to God in all things done by them.

Primative Quartet
The Primitive Quartet has been traveling and singing gospel music 38 years, and we count it a joy and privilege to spread the gospel through song. Our ultimate goal is to see saints blessed and encouraged to have a closer walk with God and to help lead souls to a saving knowledge of Jesus Christ.

Our quartet was formed as a result of a fishing trip when we sat around the campfire at night and sang. We realized that we had four-part harmony, and from there we started singing at our home church and other local churches. Today we travel approximately 50,000 miles a year and do about 150 dates annually. Our music is the traditional mountain shape note style singing accompanied by acoustical instruments including the mandolin, banjo, fiddle, guitars and acoustic bass. We play our own music on all our recordings and strive to duplicate the same sound on all our personal appearances.