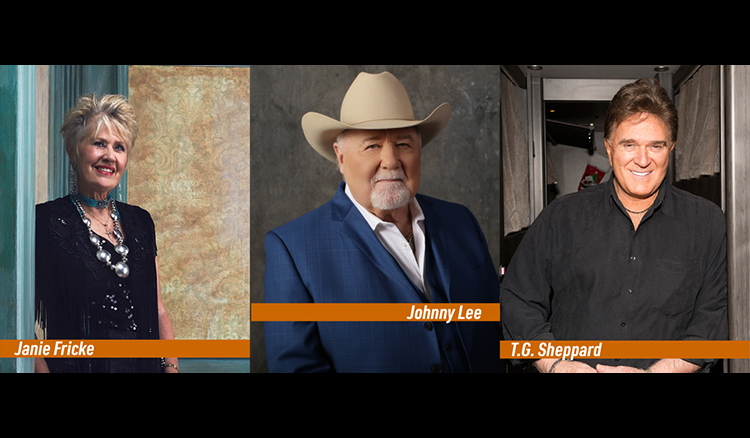 JANIE FRICKE
“All I ever wanted to do was sing.” Janie Fricke has gone from Indiana farm girl to internationally acclaimed recording artist throughout her career. She was born in South Whitley, Indiana, and raised on a 400-acre farm where her father taught her how to play guitar. From county fairs to corporate trade shows, live concerts, in recording studios, or before millions on television, Fricke’s individual sound and performance personality has captivated audiences around the world.

Fricke began her career singing in a “little church up the road” where her mother played piano. She sang at local coffeehouses, high school events, as well as her way through college where she obtained her degree from Indiana University in elementary education. Fricke then chose a musical career, working in Memphis, Dallas and Los Angeles. There, as one of the marketing industry’s most successful jingle singers, her voice became known to millions as the voice for such advertising giants as United Airlines, Coca-Cola, 7-Up, and Red Lobster. Her voice led her to singing sessions for Country artists such as Loretta Lynn, Eddie Rabbitt, Crystal Gayle, Ronnie Milsap, Barbara Mandrell, Mel Tillis, Johnny Duncan and others. She has also been given the privilege to sing on albums for Charlie Rich and Elvis Presley, after their deaths. It was a line in Johnny Duncan’s single Stranger that ultimately gained the most attention for Fricke. When it hit the top of the charts in 1977, fans wanted to know who sang the line, “Shut out the light and lead me…” The music industry took notice as her voice was heard on duets with Merle Haggard, Moe Bandy and others, leading her to her first major recording contract.

T.G SHEPPARD
T.G. Sheppard has always had an unstoppable passion for music. That passion, combined with a steadfast dedication to entertainment, has made him one of the most popular live performers in country music today. He is one of Billboard’s “Greatest of All Time Top Country Artists” and has had 21 #1 Hits! His show is chock full of his chart-topping songs like “Last Cheater’s Waltz”, “I Loved ‘Em Every One”, and “Do You Wanna Go To Heaven”, it’s only natural that T.G. has developed a reputation as a solid performer who delivers exactly what audiences want. All this and more combined with a steadfast commitment to entertainment has truly made him one of the great legends in country music.

JOHNNY LEE
Johnny Lee was born on July 3, 1946 in Texas City, Texas and was raised on a Dairy Farm in Alta Loma, Texas. His main interest was Rock ‘N’ Roll, and he led a high school band called Johnny Lee and the Roadrunners, which won local and state-wide competitions. After High School, Lee enlisted in the Navy, serving a tour of duty on the U.S.S. Chicago, a guided missile cruiser, in Vietnam. Immediately upon returning home, he started pursuing his music. In 1968, he began a 10-year working relationship with Mickey Gilley, both on the road and in the nightclub in Pasadena, Texas. That relationship continues today with The Urban Cowboy Reunion Tour celebrating 40 years of the Urban Cowboy movie in 2020! He recorded several songs used in the soundtrack. “Lookin’ For Love”, from that same soundtrack, became Lee’s first Gold Record. The song spent 3 weeks at the top of the Billboard Country Music Singles Charts as #1, and #2 on the Pop Music Singles Charts. He followed up “Lookin’ For Love” with “One In A Million”, which spent two weeks at #1.