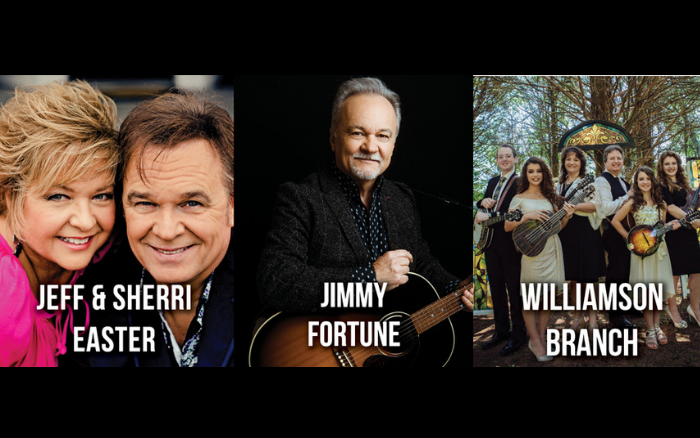 JIMMY FORTUNE
Jimmy Fortune toured, sang and performed with the legendary Statler Brothers for 21 years. He joined them first as a temporary replacement for Lew DeWitt, after DeWitt heard him singing at a ski resort and recommended him. Following an audition in Nashville, Jimmy was contacted by The Statler Brothers and performed his first show with them on January 28, 1982, in Savannah, Georgia. Due to the debilitating effects of Crohn’s Disease, Lew was unable to return to the stage with the Statlers, and Jimmy was hired as a permanent replacement in August of 1982.

Jimmy has performed in all of the U.S. States, in Canadian Provinces, and in front of audiences as large as 100,000. He was part of the Statlers’ annual Happy Birthday USA celebration in Staunton, Virginia, for 14 years. He also sang on many of the Statlers’ gold, platinum, and double platinum recordings. Jimmy’s career included The Nashville Network’s popular “The Statler Brothers Show” which aired for seven seasons and debuted in 1991 as the highest rated show for the network. Jimmy was privileged to perform at the White House on two occasions, once for President Ronald Reagan, and once for President George H. W. Bush. He also presented a special gift to actress Elizabeth Taylor by singing his song “Elizabeth” to her for a birthday celebration.

In 2015 Jimmy teamed up with the Gaither Music Group and recorded “Hits and Hymns” CD and DVD which debuted at #10 Billboard Country Album, #1 Southern Gospel, and #6 Billboard Contemporary Christian. The DVD debuted at #1 on Billboard Music Video charts. In 2017 he recorded a compilation of his favorite songs called “Jimmy Fortune Sings the Classics” on the Gaither Music label and in May 2019 they also released his latest solo project called “God and Country” which included a CD and DVD which one a Dove Award in 2020 for Country/Gospel/Roots Album of the Year.

JEFF & SHERRI EASTER
For Jeff and Sheri, gospel music is genetically programmed into their DNA. As members of acclaimed musical families-Jeff’s father is one of the Easter Brothers and Sheri’s mother is a member of The Lewis Family-they grew up surrounded by the sound of people praising God through their musical gifts.

In August of 1984, both were at the Albert E. Brumley Sundown to Sunup Gospel Singing in Arkansas. Jeff, who was playing bass for the Singing Americans at the time, took the opportunity to reintroduce himself to Sheri’s mother Polly; they had met on a previous occasion. Polly introduced Jeff to Sheri and the two were married ten months later.

They traveled and performed as part of The Lewis Family for several years. But in 1988 they decided it was time to strike out on their own, and they haven’t looked back since. Also joining Jeff & Sheri on the road is their daughter, Morgan, who joins them with vocals to round out the kind of harmonies that only family can produce. The youngest addition to the Easter family is Maura Grace, Jeff and Sheri’s ‘twentieth anniversary gift to each other’, who generally makes her way onstage doing anything to bring a smile.

Apart from their frequent appearances on the Gaither Homecoming tour and videos, Jeff & Sheri have a fairly heavy touring schedule of their own. “When we perform, we want people to leave a little different than when they came in,” Sheri explains. “We want them to have a great time smiling, laughing, crying and healing. We want them to know God loves them and that He is in control.”

WILLIAMSON BRANCH
When it comes to music, there’s a closeness among family members that cannot be overstated. Harmonies are sweeter, rhythms are tighter, and emotions are heightened. Most traditional music was born on the front porch of the family home, later finding it’s way onto stage, radio, and record. For Williamson Branch, music and family have been melding for three generations. Despite a varied background that incorporates bluegrass, country, Gospel and dance, this family band are traditionalists in every sense, carrying on a sound that springs from the very roots those archival styles imply.

Their polished approach to music helped propel their single, Blue Moon Over Texas to the #1 spot on the RMR Bluegrass Chart for 7 weeks and garnered the band the award for 2020 Valley Star Family Vocal Group of the Year. Melody Williamson was recognized as the International Bluegrass Music Association’s Momentum Vocalist of the Year for 2020. They’ve appeared on hundreds of stages over the last six years including, The Ryman Auditorium in Nashville, Bluegrass First Class in Asheville, NC, Thomas Point Beach Bluegrass Festival, Brunswick, ME, The Central Canadian Bluegrass Awards, and Bill Gaither’s Fall Homecoming.

Williamson Branch’s last 2 recordings for Pinecastle Records have elicited rave reviews while their social media following has grown to over 442,000 bolstered by several videos with millions and millions of views. Individually they’ve been given the honorary titles, Daughters of Bluegrass, Kids on Bluegrass, Tomorrow’s Bluegrass Stars and Magnolia State Banjo Player of the Year, but it’s their stage show that inspired Bluegrass Today to write, “put this band on your “must see” list.”