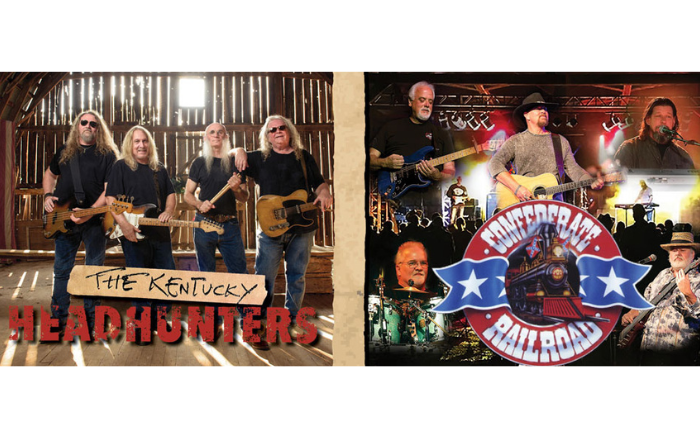 Confederate Railroad first rolled onto the national country music scene in the early 90s with its unique style and sound.

Headed by founder and frontman Danny Shirley, the former backup band for both David Allan Coe and Johnny Paycheck got their big break by signing with Atlantic Records. The first single from their debut album (“Confederate Railroad”) was “She Took It Like A Man”. It went to No. 26, a preview of what was to come. “The next two singles, “Jesus and Mama” and “Queen of Memphis” went to the top of the charts. Three more huge hits followed, “Trashy Women”, “When You Leave That Way You Can Never Go Back”, and “She Never Cried”. “Trashy” would lead to a Grammy nomination and become their signature song. That album with six hits and nearly three million sales brought Confederate the Academy of Country Music’s Best New Group Award in 1993 as well as numerous nominations from the Country Music Association and the British Country Music Foundation.

The Kentucky Headhunters created a hybrid of honky-tonk, blues, and Southern rock that appealed to fans of both rock and country music. The origins of the Kentucky Headhunters lie in 1968, when Fred and Richard Young began playing together with their cousins Greg Martin and Anthony Kenney at the Youngs’ grandmother’s house. Mark Orr also later joined them. The first incarnation of the band was called the Itchy Brothers, and the group played together informally for over a decade. After about 13 years, the bandmembers began launching separate careers: Richard Young went off to write songs for Acuff-Rose, while Fred Young began touring with country beauty Sylvia. Martin became a member of Ronnie McDowell’s band, while Kenney dropped out of music. In 1985, Martin decided to reassemble the Itchy Brothers. When Kenney declined to rejoin the group, Martin remembered Doug Phelps, whom he had met while on tour with McDowell. Phelps joined the new project, which was named the Kentucky Headhunters. Besides Martin and Phelps, the band also included the Young brothers and Doug’s brother Ricky Lee Phelps.