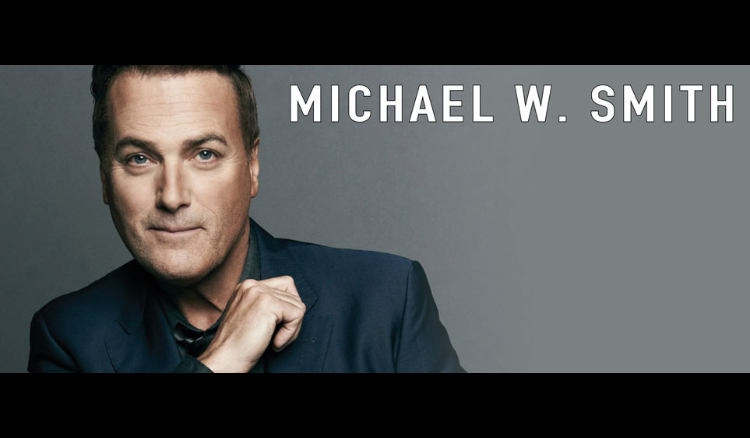 Multi-Platinum artist, best-selling author and acclaimed actor Michael W. Smith continues to live out his dream; he releases new music regularly and performs around the world to sold-out crowds of loyal and inspired fans. During Michael’s storied career, he’s not only been honored with three Grammy Awards, 45 Dove Awards, an American Music Award and has sold more than 15 million albums, he’s also given back to the global community. Michael has raised funds to battle AIDS in Africa alongside longtime friend Bono, started Rocketown, a safe haven for young people in Tennessee to meet and find hope, and has helped more than 70,000 children’s lives through Compassion International.

In many ways, Michael is a statesman, at the fulcrum of Christian music in pivotal moments. And like the ‘heart of a lion’ that is said to never go away, Michael isn’t content staying with the equilibrium. With that drive and a non-stop touring and recording schedule, Michael hit a wall most creative people hit at some point in their careers.

“I talked with my team at the beginning of 2017 and told them I’m not going to do another record unless I can write some stuff that really excites me,” he explains. “I was still grieving over my dad passing in November of 2015 and I thought it might be two or three years before I did any recording at all, if I ever actually did record at all.”

That impasse lasted about two weeks…all it took was the divisive national sentiment of 2017 and the mean-spirited banter on social media to once again ignite the creative fires. In February 2018, this prolific artist comes roaring back with not one, but two full-length albums from Rocketown Records and The Fuel Music: both a USA Today and Yahoo! Music-acclaimed studio album A Million Lights (Feb. 16) and Surrounded (Feb. 23), his first live worship recording since 2014’s Sovereign that became a top 10 Billboard 200, No. 1-selling Christian album.

One of the first songs to emerge from the studio was “Conversation,” a track that addresses the paradox of modern technology making it easier to speak at rather than with people. “In the age of social media, people have forgotten how to talk with one another, to be civil,” affirms Smith. “If you put these same people in a room together, what was once an agenda becomes a conversation.”

The studio album also features the title track, first single and video that had USA Today raving, “Michael is shining brighter than ever,” and completing their first-ever “Life” section cover story on Michael.

Admittedly a Sci-Fi geek, loving shows like “Star Wars” and “Lost In Space” and enamored by the expanse of the heavens, the “A Million Lights” video sees Smith at work in a sleek, high-tech spaceship. “I’m an astronaut. My whole life, I’ve always wanted to go into space. And now it looks like I’m in Rogue One.”

“In the video, my job as an astronaut is to get up every day and record the stars because they’re all vibrating. In fact, the whole universe is vibrating. Now, I think it’s from the voice of God. But whatever the source, each star is generating audio,” he says, recounting the story of this extraordinary video that is directed by his son Ryan.

Remarkably, this ethereal sound of the stars that is literally the music of the stars, captured and translated into sound by scientists, is in the same musical key as “A Million Lights.” There’s nothing like it in the world we know – haunting, endless and pulsating.

Other songs on A Million Lights focus on the ever-present need for love – hardly a new topic for Smith, but one he explores here perhaps from more perspectives than ever before. The titles make that clear: “Love Always Wins,” “Hey Love” and “Love Revolution.”

Turning the focus on love heavenward, Michael gathered worshippers around him and his band Nov. 2, 2017 for an intimate, set in the round recording of Surrounded at The Factory / Jamison Hall in Franklin, TN. His desire with this project is to unify the Church’s diverse expressions into one passionate, joyful cry of worship.

“I feel God moving through His Church and He is calling us together to be one voice and one heart. One bride. Every nation, every tribe and every tongue. Every social class, every denomination.

“What if we bring Him the thing that pleases Him most- our unity,” implores Michael. “We may each have different stories, and skin, and songs, but we all share His same Spirit.” Leading a diverse chorus of voices, Michael’s new worship album features 12 tracks, including the declarative “Surrounded (Fight My Battles),” which also becomes the first video from the recording that was world-premiered Christmas Eve on Michael’s Facebook and website and has since received hundreds-of-thousands of streams.

Taking the new music and fan favorites from his extensive repertoire on the road, Michael embarks on his “Surrounded By A Million Lights World Tour” March 2017. And along with the tour, more adventurous projects are in the works for Smith. Even as A Million Lights and Surrounded sparked to life, Smith is diving into other projects, each one enhancing the others in ways he never experienced before. From mapping out a memoir of lessons learned from his father to completing a symphonic composition, he’s realizing a wide range of ambitions and senses a convergence of all he’s done and has yet to do.

“For me, though, music is always my first creative outlet,” he clarifies. “Forever, until the world ends, music is the most powerful language there is. It can transform your life on every level, not just the spiritual. It can help people reconnect with why they’re here. That’s what I’m doing with A Million Lights and Surrounded.”