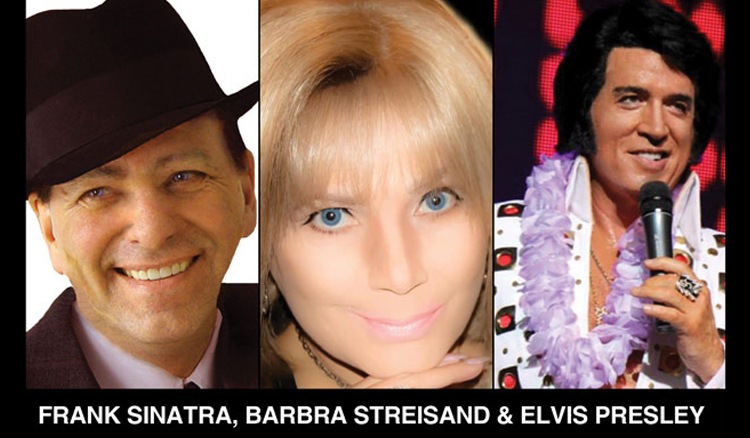 Salute to the Stars: The Way We Were

A concert like no other. “ol Blue eyes”, “Babs”, and the King of Rock and Roll… It’s tantalizing to imagine what it would have been like to have the world’s biggest singers together on one stage. Barbra Streisand, Frank Sinatra and Elvis…The Way They Were!!!!

Rebecca Clark (Barbra Streisand) has starred and toured with the Bob Hope USO shows. When Ms.Clark is not performing Streisand Voice, she Loves singing in her own natural voice which has led her all over the world as herself. She has performed at the Aladdin hotel in Las Vegas, the Bellagio in Las Vegas, the Cannes music festival in France, Spago’s, Beverly Hills, the Waterfront Hilton Hotel in Huntington Beach ca, and other top venues across the world including, Puerto Rico, and Europe. Ms. Clark performed in an off Broadway production with Oscar recipient Geraldine Fitzgerald. Ms. Clark has also performed in five other lite opera theatre productions in New York. Ms. Clark has performed with Las Vegas Own LEGENDS IN CONCERT, STARS IN CONCERT in Berlin Germany, She also opened for comedian David Brenner. and has performed as guest artist (as Rebecca Clark) with such famous artists as Jack Jones, Keely Smith, Trini Lopez, Jimmy Osmond, Roy Clark, Mickey Gilley, Jim Stanford, just to name a few. Ms. Clark was born in Brooklyn, New York, and soon after was raised in a Catholic Orphanage for the first thirteen Years of her life. Throughout her journey and determination to rise above and follow her dreams in life, through the road less traveled, Ms. Clark now makes her home in beautiful Palm Springs California. This rare and incredibly talented performer is internationally known for her music and gift at charming audiences, and leaving her fans breathless. Book Rebecca Clark” Hello Gorgeous Show” today for your next event. On clients request, Ms. Clark can perform with a full band, duo, as well as a one women solo performer, and now travels with a complete PA System And the best music background tracts in the world from jazz standards, disco, oldies, country, showtunes, motown, blues, and a whole lot more. Book Rebecca Clark today, you will be glad you did!

Gary Anthony (Frank Sinatra) moved from Hollywood to Las Vegas in 1994 fulfilling his lifelong passion glided across Las Vegas stages and around the world performing his tribute to Frank Sinatra. Owner of Major Entertainment Production, Inc. for over two decades contributing and supporting Las Vegas booking conventions with clients from all over the world keeping many of his fellow entertainers and musicians working with award-winning excellence! Hailed for his voice and mannerism, Gary Anthony was chosen by Hollywood to represent Ol Blue Eyes in two national commercials, Delta Airlines and National Basketball Association (NBA) Los Angeles Times and Las Vegas Sun newspapers ran stories of his chorus line of stunning fans, high kicking to New York, New York. With this kind of background, Gary Anthony’s new adventure was a promise to his father to record his writings that are turning out to be a great success! Gary Anthony brings back the original sounds of that magical era that we call the Great American Songbook.

As the King of Rock and Roll, Elvis Presley, is the man known worldwide as the TRUE Voice of Elvis, Doug Church. Doug began his career in the US Air Force, brandishing a guitar and homemade costume, where he began winning talent contests held annually by the Air Force with his amazing rendition of the King of Rock n Roll. He has awed his audiences for years, leaving them totally mesmerized and shaken. They swear that when you close your eyes, Elvis is right there in the room with you. Doug’s voice has been acknowledged as being the closest to “The King’s” by not only his fans and peers but also by those who knew Elvis personally and is regarded as an Icon in the industry.