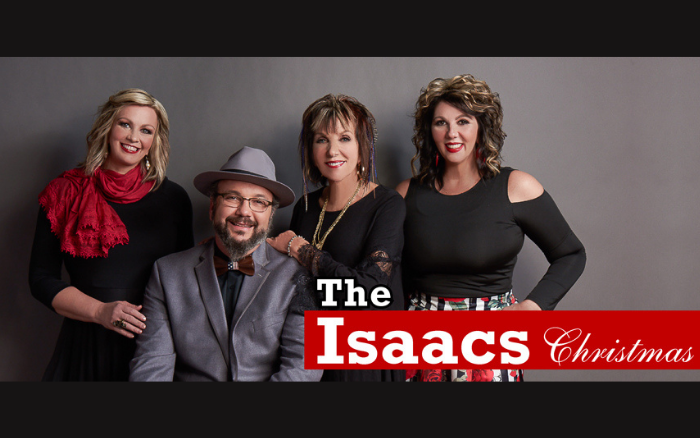 The Isaacs, a multi-award winning family group who began singing 30 years ago, are based out of LaFollette, TN (30 min north of Knoxville). The vocalists are Lily Isaacs, Ben Isaacs, Sonya Isaacs and Rebecca Isaacs Bowman. Playing their own acoustic instruments and joined by other band members, The Isaacs have a unique style that blends tight, family harmony with contemporary acoustic instrumentation that appeals to a variety of audiences. Their musical influences immerge from all genres of music including bluegrass, rhythm and blues, folk, and country, contemporary acoustic and southern gospel. They perform frequently at the Grand Ole Opry, are active members on the Gaither Homecoming Videos and Concert Series and travel throughout the year performing internationally. Concert venues include civic centers, auditoriums, arenas, fair grounds, parks, churches and other locations. They have performed the National Anthem for many sporting events, including a Cincinnati Bengal’s football game, several Nashville Predators Hockey games, an Astros/ Braves pre-season baseball game as well as various political gatherings. They also received a standing ovation for their patriotic performance at Carnegie Hall.

Lily Isaacs is a vocalist and matriarch of the group. She was born in Germany after World War II to two Jewish Holocaust survivors and moved to the United States when she was 2 years old. She grew up in the Bronx, NY studying theatre and performing on Off Broadway and in 1968 recorded a folk album on Columbia Records with her friend as “Lily and Maria.” She became a Christian in 1971 when a death in the family brought her and patriarch Joe Isaacs to church for the first time. That night, they began singing Christian music and laid the foundation upon which the Isaacs ministry has been built.

Siblings Ben, Sonya and Rebecca all sing and play different instruments. Ben, the oldest sings and plays upright bass on stage. He spends much of his off time in the studio producing and playing bass on numerous other artists’ albums including Merle Haggard, George Jones, a Jimmy Martin Tribute Project and Cherryholmes, and has received 5 Grammy nominations for the latter two artists. He arranges many of the Isaacs songs and is their sound technician on tour. Ben and his wife Melinda and their three children, Jacob, Cameron, & Kyra, make their home in Hendersonville, TN.

Sonya, also living near Nashville, TN is newly married to Jimmy Yeary, and is the middle daughter and mandolin player/ vocalist for the Isaacs. Rebecca, the youngest sister, sings and plays guitar and resides in LaFollette, TN with husband John Bowman and their 2 children, Levi and Jakobi.

Sonya and Rebecca collaborate on many of the Isaacs songs and have penned most of their hits including , “Stand Still” , “He Understands My Tears” “If That Don’t Make You Wanna Go”, “Heroes”, “Elisha’s Song It Is Well” and “From the Depths of My Heart” (Sonya and Ben), They have also penned songs for many other artists including Gold City Qt, Trisha Yearwood, Mark Lowry, Vince Gill, Cherryholmes, Mike and Kelly Bowling, Jeff and Sheri Easter, and many others. In 2000, Sonya released a solo country album on Lyric Street Records produced by Vince Gill. She is a songwriter for Disney Music Publishing and appears in the 2009 Hannah Montana Movie as a background singer for Miley and Billy Ray Cyrus.

The Isaacs have made frequent guest appearances on many other artists records including Dolly Parton, Trace Adkins, Brad Paisley, Paul Simon, Vince Gill, Randy Owen, Trisha Yearwood, Ralph Stanley, Mark Lowry, and many more. They enjoy singing and traveling most though, and provide a professional, style sensitive performance wherever they go.