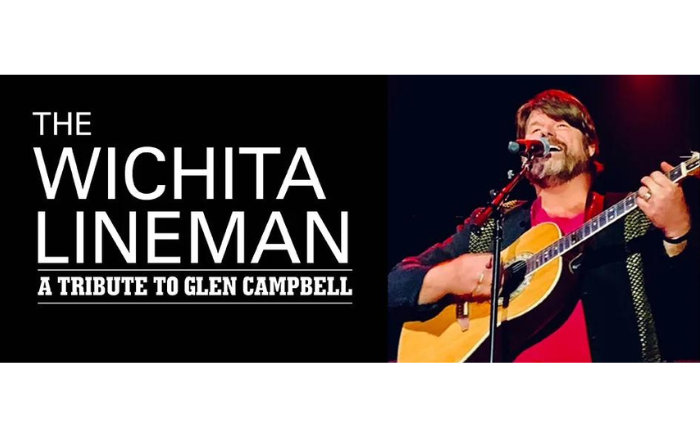 The Wichita Lineman – A Tribute to Glen Campbell

Glen Campbell spent 5 decades entertaining audiences all over the world. He was an American Treasure whose songs and dazzling showmanship shot him to superstardom in the 1960’s.

Glen’s hits included songs like: “Gentle On My Mind”, “By The Time I Get To Phoenix”, “The Wichita Lineman”, “Dreams of an Everyday Housewife”, “Galveston”, “Rhinestone Cowboy”, and “Southern Nights”.

During his 50 years in the music business, Campbell released more than 70 albums. He sold 45 million records worldwide and accumulated 12 gold albums, four platinum albums, and one double-platinum album. He placed a total of 80 different songs on either the Billboard Country Chart, Billboard Hot 100, or Adult Contemporary Chart, of which 29 made the top 10 and of which nine reached number one on at least one of those charts.

After Glen’s death in August of 2017, fellow musician and entertainer in his own right, Carl Acuff Jr. along with a notable group of musicians, decided to put together a tribute show to this entertainment legend featuring his wonderful catalog of music. Therefore, The Wichita Lineman show was born. After searching around on how to approach this project, Carl hand picked musicians to bring this show to life with full instrumentation, great vocals and musical ability. Each wonderful entertainers in their own right, since 2018 they have been bringing to life Glen Campbell’s music once again for all the world to enjoy the way it was meant to be performed.

This show is put together with Glen’s original arrangements from his 2012 farewell tour provided to the group by Glen’s arranger and Keyboard player for over 30 years TJ Kuenster. The band also includes some Glen Campbell Alumni who have worked with a little of everyone including Louise Mandrell, Johnny Mathis, Wayne Newton, Glen Campbell, Brad Paisley, Keith Urban, Johnny Rodriguez, T.G. Sheppherd, and even Elvis.