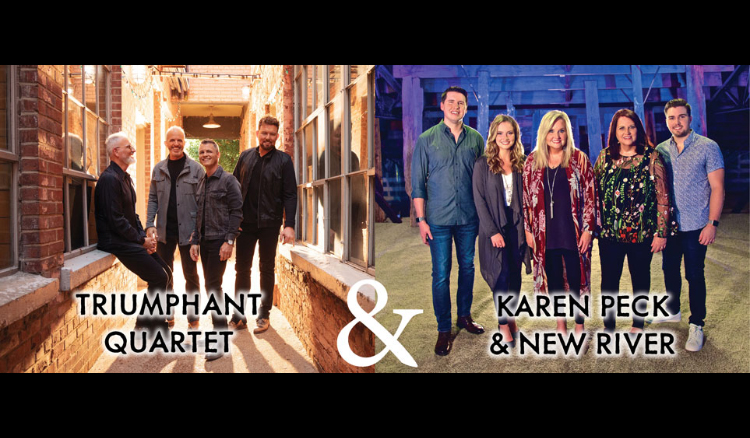 Triumphant Quartet
The one consistent thing about life is change. Things around us are constantly changing. So when a group like Triumphant Quartet maintains consistency, it speaks volumes about whom they are and what all they have accomplished. Triumphant is the face of quality Gospel Music, Christian integrity, family values, friendship and dedication. The group has been that way since their beginnings in 2003, when the four friends first walked out on to the stage of the Louise Mandrell Theater, in Pigeon Forge, Tennessee as a headlining talent. Each current Triumphant group member was there in that defining moment, and has continued together ever since. Their smooth harmonies, and rich quartet sound quickly gained them national attention, recognition and concert demand. That popularity promoted the group in 2008, from singing daily at the theater, to touring nationally and performing in major concert venues, auditoriums and churches. It has also voted them the Fan Favorite Quartet in the Gospel Music field for the last several years, and each group member also being nominated for and receiving various awards. Triumphant Quartet has had multiple #1 songs and several others have climbed the Top 40 music charts. They have multiple songs and albums of the year as well, which contributed to their popularity. They feel very blessed. Gospel music fans agree that the triumphant sound is distinctive, solid quartet singing, voting them fan favorite artist of the year for 2018 and 2019. Triumphant excels in diversity, and also expands their musical borders to a wide variety of styles, that is enjoyed by church audiences and music lovers. When Triumphant takes the stage, the audience is entertained by the musical variety, the engaging personalities and a bond that is brought together by years of friendship. Audiences will find themselves smiling, laughing, crying, encouraged and uplifted. And most of all, they will walk away having had the Gospel Message presented to them in a powerful way, with a hope that many will receive Christ as their Lord and Savior. Jesus Christ is the focus of Triumphant. He is the reason they sing. These four gentlemen are faithful as always and steadfast and true in their goal of giving their very best in all they do.

Karen Peck & New River was formed in January 1991. Karen teamed with her husband, Rickey Gooch and her sister, Susan Peck Jackson, to form the group. Karen had already made a name for herself, serving as beloved Soprano for the popular Rex Nelon Singers for a decade. During that time she earned her first GMA Dove Award, as well as her first of 11 consecutive Singing News Fan Awards for Favorite Soprano.

Much success has followed the popular vocalist since the formation of Karen Peck & New River. Over the years, the musical team has shared the Gospel through song around the world, traveling throughout the US and Canada, as well as Israel, Central America, and Europe. The group is regularly featured on the popular Gaither Homecoming Video Series, which airs worldwide.

In 2012, Karen was afforded the opportunity to transition from music to movies when she enjoyed a feature role in the hit film, Joyful Noise, appearing with Dolly Parton and Queen Latifah. She was the lead singer on the popular song from the movie soundtrack, “Mighty High.” In 2014, she followed up the appearance with a role in Redeemed, starring Ted McGinley, Grant Goodeve and Teri Copley.

Amid the personal success Karen has enjoyed, New River has been equally blessed with countless honors and accolades, including many radio hits, which have soared up the Southern Gospel Music airplay charts. Karen Peck & New River has enjoyed over 20 Number One hits, including “Four Days Late”, which was named Song of the Decade for 2000-2010 by The Singing News Magazine. Many of these hit releases were either written or co-written by Karen, including “I Know I’ll Be There,” “The River,” “Revival,” “Pray Now,” “Gotta Be Saved,” “Everybody’s Going Through Something,” “On The Banks Of The Promised Land,” “Daddy’s Home,” “I Am Blessed,” “I Wanna Know How It Feels,” “Calling,” “Finish Well,” as well as “Hope For All Nations,” which the group performed in Roatan, Honduras in the summer of 2017.

Over the years Karen Peck & New River has become a family affair, as Karen and Rickey’s daughter, Kari, as well as their son, Matthew are full-time group members. Matthew’s wife, Preslee, is serving as the product manager. In addition to Karen’s sister, Susan, Grant Gibson completes the talented vocal group.

Karen Peck & New River has evolved throughout the past three decades, and has firmly established a place at the forefront of Southern Gospel Music. However, the Gospel Music Hall of Fame member refuses to rest on past laurels. New River continues to deliver a progressive sound that is distinctive yet remains true to the traditional styling that has made them a fan favorite. They have been faithfully striving for excellence to make KPNR relevant in today’s society. Collectively, they are more committed than ever to continue to share the message of the Gospel of Jesus Christ.